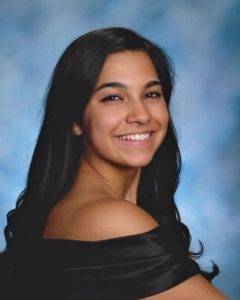 Alonza Klopfer is a Level 10 athlete training at North Stars Gymnastics where she is coached by Tony Gehman and Ashley Umberger.
She resides in Boonton, NJ with her parent’s Fred and Marina Klopfer.
In the fall, Alonza  plans to attend University of Alabama to study Veterinary Medicine.

Words of Wisdom:
It only seems impossible until its done.